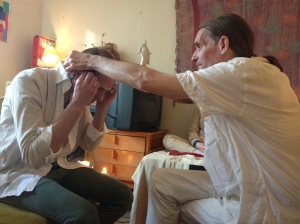 – The birth of a new meditation center in Orebro in Sweden

During Giten’s birthday May 15, 2015 in Stockholm, Sangeet Giten Meditation Center will be offically initiated by spiritual teacher and author Swami Dhyan Giten. “Sangeet” means music and Giten will also talk about the relationship between music and meditation.

“Music and meditation are two aspects of the same phenomenon.”

“When we rediscover our authentic inner being, our meditative quality within,

the inner silence and emptiness, we find that the whole life is music.”

Deva Emanuel, musician and student to Giten since 6 years, told Giten that he and his girl friend, Prem Kalyani, musician, violin player and student to Giten, had decided to listen to Giten’s recorded lectures and conducting satsang in silence and meditation on Sundays in Orebro in Sweden.

Giten asked him if they would be open to invite people to the lecture and the satsang, and Emanuel answered that they had already thought about that.

This became the birth of Sangeet – Giten Meditation Center in Orebro, which will offfer Satsang inspired by Giten and Giten’s recorded lectures on Sundays. Giten also said that Orebro is a bright and intelligent university town, and that it should be potent for meditation.

Sangeet is an independent meditation center, which is spiritually inspired by Giten.

Deva Emanuel met Giten for the first time at the library of Falun in the north of Sweden when he discovered Giten’s best-selling book in Swedish, Meditationens Sång – Om meditation, relationer och andlig kreativitet (Song of Meditation – About Meditation, Relationships and Spiritual Creativity).

Emanuel says: “It was a moment of pure magic when I for the first time discovered something beautful, inspiring and and supportive in Giten’s book “Song of Meditation”.

Everything inside me, which I had tried to suppress and hide away, was suddenly present in my life on the outside, which on the inside created a stronger longing that I could ever imagined.
Six years ago, I stood at a library in Sweden, and watched a man who looked like he was trying to hide something among the books in the shelves beside me. I became curious, and when the man left, I looked – and there my eyes fell on a book which was pushed far back on the shelf, which had the name “Song of Meditation”.
This day on the library was a tremendous kickoff for my spiritual thirst, and Giten’s Swedish book “Song of Meditation” became my ticket to the roller cost ride of my inner journey. I had never heard about about awareness and meditation before, but this meeting talked to something so deep inside myself that it totally transformed my life.”
Deva Emanuel has been a student to Giten since 6 years.
Giten’s book in Swedish, “Meditationens Sång – Om meditation, relationer och andlig kreativitet (Song of Meditation – On Meditation, Relationships and Spiritual Creativity) is available at Swedish Internet Book Store Adlibris:
http://www.adlibris.com/se/bok/meditationens-sang-9789188362230