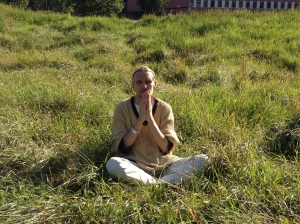 Giten on Jesus Christ:
Sermon of the Mounts

An excerpt from the book “Jesus Christ: The Way, The Truth and the Life”, which Giten is currently writing.

AND SEEING THE MULTITUDES, HE WENT UP INTO A MOUNTAIN, AND WHEN HE WAS SET, HIS DISCIPLES CAME UNTO HIM

The Gospels starts in a very beautiful way.

The Bible is the book of the books. The meaning of the word “bible” is – the book.

It is the most precious and beautiful document that humanity has. These statements are the most beautiful ever made.

That is why it is called “The Testament”, because Jesus has become the witness of God.

While Buddha’s words are refined and philosophic, Jesus words are poetic, plain and simple.

The beginning of the Gospel of Matthew states that 42 generations have passed from Abraham, the founder of Judaism, to Jesus.

Jesus is the flowering, the fulfillment, of these 42 generations.

The whole history that has preceded Jesus is the fulfillment in him.

Jesus is the fruit, the growth, the evolution, of those 42 generations.

The path of Jesus is the path of love. Jesus moved among ordinary people, while Buddha – whose path is the path of meditation, intelligence and understanding – moved with sophisticated people, who was already on the spiritual path,

But the strange things is that the tradition rejected both Jesus, Buddha and Socrates.

All the prophets of the Jews that had preceded jesus was preapring the ground for him to come.

That is why John the Baptist was saying: “I am nothing compared to the person that I am preparing the way.”

But when Jesus came, the etablishment, the religious leaders and the priests, started feeling offended.

His presence made the religious leaders look small.

And this has always been so, beacuase of the sleep and the stupidity of humanity.

AND SEEING THE MULTITUDES, HE WENT UP INTO THE MOUNTAINS, AND WHEN HE WAS SET, HIS DISCIPLES CAME UNTO HIM.

The multitudes, the masses, the crowd, is the lowest state of consciousness. It is a deep ignorance and sleep.

If you want to relate and communicate with the masses, you have to come down to their level.

That is why whenever you go into the masses, the crowd, you start to feel suffocated.

This suffocation is physical and psychological, beacuse you relate to people, who functions from a very low state of consciousness.

They pull you down and you become physically and psychologically tired and drained.

That is why a need for meditation and aloneness arises.

There is a practice in the life of Jesus that he noves into the crowds of people, but after a few months he goes to the mountains. He goes away from the crowd, to be with God.

When you are alone, you are with God.

To relate to the masses brings you down to their level of consciousness, but only in the presence of God, you can fly.

To be able to work with the masses, to be able to help them, you have to relate to them according to their level fo consciousness – and this is tiring and draining.

Both Jesus and Buddha moved to the mounatins, to a lonely place, just to be themselves, and to be with God to regain their vitality to be able to come back to the masses where people are thristy.

The montain is where Jesus do not need to think about the masses, where he can forget the mind and the body.

In that moment of aloneness and meditation, one simply is.

This is the inner being, the source of life.

And when you are full again, you can share again.

AND WHEN HE WAS SET, HIS DISCIPLES CAME UNTO HIM.

To talk to the masses and to talk to disciples is two very different things.

To talk to the crowd is to talk to people, who are indifferent.

The crowd is resisting, defensive and argumentative.

To talk to disciples means to talk to people, who have a basic thirst. It means that they are not defensive, they are open to listen to the heart of truth.

AND HE OPENED HIS MOUTH, AND TAUGHT THEM, SAYING.

Jesus escaped into the mountains from the crowd, but he did not escape from the disciples.

He was available to the disciples.

In his aloneness, Jesus is with God. And through Jesus, the disciples can feel God.

The closer the disciple come to Jesus, the more they will see that Jesus is a silence and emptiness through which God can sing.

And the more the disciple himself will become an emptiness, he will also be able to help other people.

AND HE OPENED HIS MOUTH, AND TAUGHT THEM, SAYING.

BLESSED ARE THE POOR IN SPIRIT, FOR THEIRS IS THE KINGDOM OF GOD.

This is the most fundamental statement of Jesus.

With this statement, Jesus has said everything.

The “poor in spirit” is exactly what Buddha means with the term Shunyatta – “emptiness”, no-self, nothingness.

It is when the ego disappears, and you are a nobody, a silence.

If you are a nobody, if you are nothing, you are God.